Minion costume for a dog

Woof! Woof! Make your dog into a daring minion at the service of Gru in his mission to steal the moon with this Minion costume for a dog.

Despicable Me is a 3D animation comedy film made by Universal Studios and Illumination Entertainment directed by Pierre Coffin and Chris Renaud. There is chaos in Egypt, the great pyramid of Giza was stolen and replaced by an inflatable replica, all because of an evil villain. While in a suburban neighbourhood surrounded by white fences with flowering roses, is a black house with a yellowish lawn. Without the neighbours knowing it, under this house is a great secret hideout. The protagonist, Gru, is the number one villain who wants to carry out an unthinkable task with the help of his great army of minions and various resources. He attempts to do this while trying to outwit a new arch-rival, the supervillain Vector (who stole the pyramid). He believes that he has the perfect plan when he decides to do the impossible: steal the moon. In carrying out his plan he is faced with many complications. On his journey he meets three little orphans (Margo, Edith and Agnes) who will become the biggest challenge for the supervillain.

This original costume includes a blue and yellow jumpsuit, and a headpiece in yellow with Minion sunglasses. 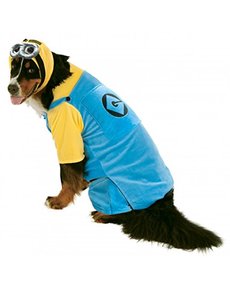 Upload your photos to Instagram with the hashtag #funidelia followed by #funidelia30112.