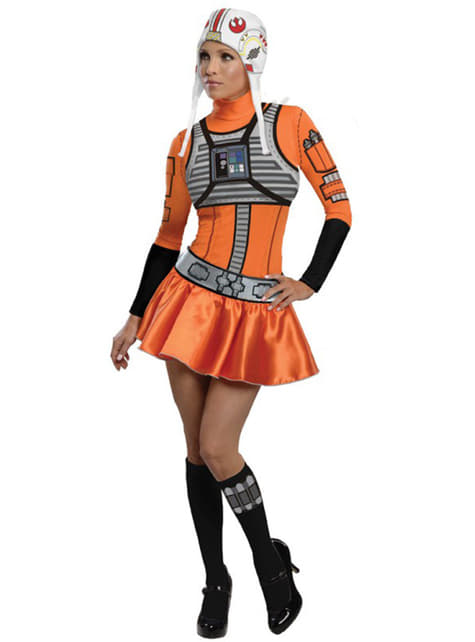 Fly in style and destroy the Death Star with this Star Wars X Wing pilot costume for a woman.

The T-65 X-wing starfighter was the main multipurpose starfighter of the Rebel Alliance and its successive governments. Known for its versatility and outstanding performance in combat, it was the favourite of the Rebel pilots and the New Republic. It had deflector shields, a hyperdrive, an astromechanic droid R2 for repairs and navigation, and a complement of proton torpedoes, the X-wing allowed the Rebellion to launch attacks on Imperial space with more chance of success. Star Wars is an American media franchise belonging to the genre of science fiction, and was conceived under the screenwriter, director and film producer George Lucas. The plot is situated in a very distant galaxy, where there has been a confrontation between the Jedi and Sith for centuries.

This gorgeous X-Wing pilot costume includes an orange dress with many details in grey and black, a grey belt, black socks and a white cap which perfectly imitates the helmet these skilled pilots wear.

Upload your photos to Instagram with the hashtag #funidelia followed by #funidelia05102.